Silence: Flu and uncertainty in what to say 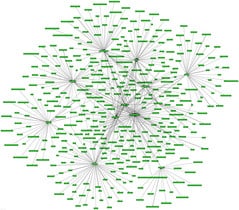 Wikipedia Concept Map
Originally uploaded by juhansonin. Things have clopped along here at the Stinsons Along the Elizabeth. Jennifer has had morning sickness for what seems like four months now. And we were hit with the full force of this season’s flu, a strain not in the vaccination; we were down for the count for two weeks.

Now, on the reason for the post: Wikipedia as a source.

From Barbara Nguyen at The Editors Weblog: Top (news)papers reference Wikipedia and raise question of website’s credibility as source. Evidently, Jimmy Wales, co-founder of Wikipedia, thinks the encyclopedia’s best journalistic use is for background research rather than as a source to be quoted.

I’d say the same goes for academic papers. I wouldn’t ban its use, but I’d certainly want substantial supporting documentation.

As to the job search: let’s say that good news doesn’t come in thin envelopes.