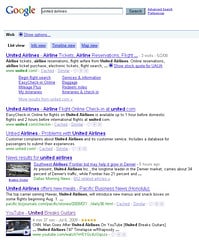 United Breaks Guitars
From Tidewater Muse. This has to suck… for United Airlines. (Although I guess if you take the adage “The only thing worse than being talked about… is not being talked about.” David Carroll’s $3500 Taylor guitar was trashed by United Airlines. They told him to get lost and wouldn’t pay for the repairs. He wrote a great song that is going viral on YouTube. So, now, Google “United Airlines” and his video is number five in results.

As I write this, the video has 4,563,006 views… okay, so maybe half a dozen of them are me. This is my new favorite song. And I’m not a real county fan. The song has struck a nerve with me… and four million other people… Why? Well, aside from the fact it has a little catch to it, it’s a great customer service teaching tool. It’s what we’ve all wanted to do but haven’t had the talent.

I don’t think people in most corporations understand that the rules have changed and if they mistreat customers the penalty is larger today than in years past. (Okay, I’m not sure many of us understand the new rules completely; I certainly don’t.) Today, a misstep can be recorded and broadcast. The old story was that if a customer had a good experience, they might tell three people; if they had a bad experience, they would tell ten. Today, I might tell a couple of people about good experiences… but pull a bonehead move, and I’ll blog about it. And, if I had talent like Dave Carroll, that story would go viral.

And, indeed, Mr. Carroll’s story has gone viral. And this, my friends is worth the four minutes and thirty-six seconds:

And, I have to think that Dave Carroll and the Sons of Maxwell‘s star has taken off. If I’m any indicator of how their fan base is expanding… well, let’s just say that I’m a fan, and I never would have heard of Dave Carroll and the Sons of Maxwell if I hadn’t stumbled on an aside mention of the video. (And it was purely random. I’d actually have to hunt to find the page.) I’m not a country fan, but I’ve been listening to Maxwell’s sons’ songs on YouTube off and on all evening. Had I an iPod, I’d buy their tunes. As it is, I’ll likely purchase their albums. Well, okay, not in vinyl but in CD, but the concept is the same… I tried to stream them on Pandora, but Pandora doesn’t know them (but knows Root Boy Slim and the Sex Change Band?)

Anyway, I’d love to see them play at the nTelos Pavilion here in the fair City of Portsmouth.

Meanwhile, I’ll not ever be able to think of United Airlines without thinking about United Breaks Guitars. And that can’t bode well.

I know that the next time I fly United, I’m going to make a crack to some UAL employee about guitars.

Tidewater Musings
0
Like
Previous post It’s difficult to preach family values…
Next post It’s September, so it must be time for me to re-rack my school search
↑